What Are The Sub Primal Cuts Of Beef? Explore Info Here!

The meat that we eat or use for cooking, mostly comes from the different cuts of the beef that are divided and cut beautifully from the whole carcass of the cow. The carcass of how is divided into several primal, subprimal and secondary cuts.

Initially, the carcass of the cow is divided into four parts that divides the animal into two forequarters and two hindquarters. This is the basic division after which the animal is further divided into several other sections.

The cow is cut into primal and sub primal cuts which makes it easier for grocery stores and customers to sell and buy meat according to their requirements. In this article, we will go over the list of primal beef cuts and sub primal cuts of beef (according to the standards of American food standards) to help you get a better understanding of the beef you use on a regular basis.

What are Primal Cuts of Beef? 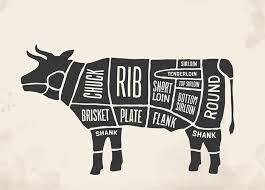 Each of these primal cuts is then broken down into further cuts known as sub primal cuts of beef which are what is sold in the grocery stores.

What are Sub Primal Cuts of Beef?

The flavor and texture are the very main attributes that are affected by choosing the right cuts. Meat from lesser-used muscles, like the loin, are very tender with a mild flavor whereas cuts from muscles that get worked out a lot, like the chuck or round, are tougher but richer in beefy flavor.   It is important that you choose the meat from a cut that will compliment your dish by providing the required texture and flavor.

How Many Parts are There of Sub Primal Cuts of Beef

Sub primal cuts of beef are divided into several sections which all have different usage and taste. Here is some brief info on the sub primal cuts.

Sub primal cuts of beef determine the usage of beef and makes it easier for customers to choose the meat type according to their dish requirements.

What Is Short Plate Beef Cut? Get Info Here!

What Is Beef Loin Meats? – Get Cooking Here!

What Is Beef Loin Meats? - Get Cooking Here!