What Is The Chuck Cuts Of Beef? Get Your Answer Here!

According to a solid study by Beef2Live, in 2020, the global consumption of beef was 130 billion pounds. Beef is widely consumed in the United States of America alone. With such massive demand for beef, restaurants have come up with various dishes to serve. These beef dishes accommodate a wide variety of beef cuts.

A famous beef cut known as the chuck cuts of beef is popular in the United States of America. The chuck cuts of beef lie in the chest region of the cow just below its hump. It is delicious and thus remains in high demand. This article will explore the variety of beef cuts available and specifically talk about chuck roast cuts. Read this article till the end to learn exciting information.

There are, in total, 8 different types of beef cuts that are known as primal cuts. These are: 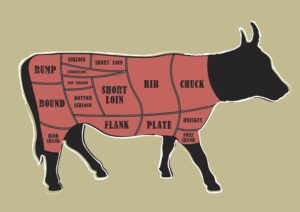 Steaks and chuck roast cuts are made from this area of the cow. Chuck cuts of beef lie on the fattier side with more fats than the other parts of the body. Hence, they are perfect for steaks and roasts, which result in a fantastic fatty flavor and taste.

Apart from being fatty, chuck cuts of beef are also a bit firm because they lie in the animal’s shoulder area. The shoulder area of the animal is primarily used for movements. Thus, it has a toughness element. It contains numerous connective tissues, making the meat a bit tough and taking a considerable amount of time to cook. However, the hard work pays off since the chuck cuts of beef are full of flavor and in high demand in many dine-in restaurants.

This is a signature arm roast, also famously known as shoulder roast. This simple yet tasty dish is available in many fine dining restaurants. It is considered the perfect dinner dish in the United States of America.

The chuck eye roast is a less popular option as compared to the chuck arm roast. However, it is a much more economical option and is similar to a ribeye steak. Hence, it is a common find in restaurant menus.

Chuck roast is also famously known as shoulder steak. This roast is primarily used for chuck rolls or pot roasts. It is a popular item on the menu.

These chuck ribs are significant in terms of taste and texture. They are tender and are cooked in slow heat. This dish takes considerable time to prepare but is one of the popular items.

These boneless country-style ribs are simply the boneless version of the bone chuck-in short ribs. They are equally tender as the bone version. However, they are less flavorful than bone ribs since the prominent flavor is derived from the bones.

Now, who isn’t aware of the Denver steak? This dish is prepared from the serratus ventrally muscle of the chuck cut. It is a muscle beneath the shoulder of the animal which is comparatively softer than other parts. This makes the Denver steak a tender steak option popularly available on menus.

The ranch steam holds its true power because of the marination. It is a versatile cut grilled to perfection, topped with ranch sauce. It lies on the pricier side but remains a popular option.

Pricing of Chuck Cuts of Beef

Prices of various dishes prepared from the chuck cuts of beef vary by the type of dish prepared and the restaurant it is served in. It is not surprising that the same dish costs differently in different restaurants.

However, the standard price of the chuck cuts of beef remains somewhat the same. A chuck roast and steak cut costs around $6.09. This price is minorly varied in various grocery stores such as Walmart or Target.

Do let us know your feedback regarding this post, and tell us which type of beef cut you prefer the best. We would love to hear your comments.

What is a chuck cut of beef?

A chuck cut of beef comes from the animal’s upper shoulder and lower neck. It is used to prepare steaks and roasts. The cut of beef is also known as the 7-bone steak meat. Chuck cuts of beef lie on the fattier side as compared to other beef cuts.

What are the different cuts of chuck roast?

There are a variety of different cuts of chuck roast. Some of them are top-blade steak, chuck eye roll, chuck roll, bone chuck-in short ribs, and much more. All of these items are popular in dine-in restaurants scattered around the United States of America.

What is the best cut of a chuck steak?

The chuck eye is considered one of the best cuts of chuck steak in terms of taste and texture. Apart from that, mock tender, shoulder steak, ranch, and flat iron are also popular options. All of these steaks are known because of their tenderness and flavorful burst.

What is another name for chuck beef?

The chuck beef is also known as beef chuck roast. It consists of the same meat coming from the shoulder area of the animal. Popular steaks and roasts from the area include blade roast, chuck eye, arm steak, arm roast, seven-bone roast, and a lot of popular items.

The Art of Biscotti Making: A Delicious and Versatile Italian Treat

What Is The Shank Cuts Of Beef? – Get Guide Here!

What Is The Shank Cuts Of Beef? - Get Guide Here!